As I’ve explained numerous times in this blog, I have near-no connections here in Albany, and making new friends is not easy. I started out by going to some Meetup events, but they aren’t posted as often as my group did in Rochester, which isn’t a bad thing; it just means that I have less opportunity to meet people and build relationships with them.

Through weird happenstance, I found out that an old friend has been living in Albany since she started school at RPI. We were friends who got along when we were together, but were only together a few times a week. Once she graduated, it was another goodbye I was saying to someone who was a little bit older than me. We didn’t keep in touch, but neither of us were offended or were effected. Life moved on, and so did we. 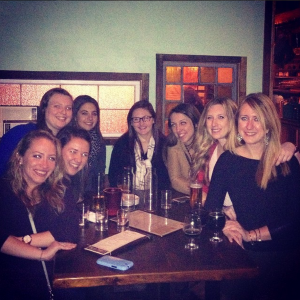 But now, I’m here in Albany without too many connections. and as awkward as it may have been, I reached out to her after nearly 10 years to re-connect over Facebook. In those first few conversations she was nice enough to invite me out with her group of friends. I was really excited to go, if only for the fact that I could say I had plans on a Friday night.

The plans were nothing fancy, just meeting out at a local bar, but I had the chance to meet her group of friends who were equally as welcoming, even though they had just met me. I knew that I wouldn’t walk away that night with my new best friends for life, but it felt really good to be out with a fun group of people again.

Leaving college, I took for granted how many friends I had. Some were so close to me that they knew every park of me, and others were acquaintances, but just the same, I could find support anywhere I went on campus. Now, a lot of those supports are gone because moving away proved what our friendship actually was. A handful of those friendships survived despite the distance, proving to me that they were true friends. The ones that dissolved may or may not grow again, but as proven by last night, anything is possible.

If I learned anything from last night, it’s that going out on a limb can be worth it. It felt a little awkward to reach out to an old acquaintance after so long, but it turned out to be a great night. I hope that sometime down the road, I can help someone else feel a little more adjusted and welcomed to a new city.